You can never go wrong with a diamond.

And why is that?

Firstly, diamonds are rare and valuable. Unlike other gemstones that are made up of more than one element, diamonds are made of only one thing: Carbon. The chances of a pure stone happen rarely, making it expensive and highly sought-after. Diamonds are also the hardest gemstone on earth, with a 10 ranking on the Mohs scale of hardness. Nothing can scratch a diamond besides another diamond.

Secondly, diamonds are timeless and classic. They’re versatile gemstones that can be used in all forms of jewelry and are often prized for its brilliance. You can mount them in any kind of metal, from white, yellow or rose gold to even platinum, and they would still flatter anyone. Diamonds can take the spotlight as center stones or pendants, while small ones can accentuate or frame other gemstones as melees or accent stones.

And finally, there’s just this appeal that comes with diamonds. Often used in wedding rings or to celebrate a married couple’s 50th anniversary, diamonds symbolize longevity, everlasting love and endurance— just like how a diamond can withstand enormous heat and pressure to become the shining, brilliant stone that it is.

But going beyond the colorless diamonds that are usually more popular, these gemstones also come in different colors, which are rarer, if not sometimes even more valuable. From canary yellows, to warm cognac browns, pale blues and even candy-colored pinks, diamonds that come in hues other than colorless are categorized as Colored Diamonds.

If you want a something different from the usual colorless diamonds, Colored diamonds are your best bet!

Colored diamonds are ranked based on the intensity of its color. The more vivid and saturated color it has, the more valuable it is. The ranking used for these colored diamonds are as follows:     Remember: each grade is not just a one-size-fits-all. There are many factors to consider, such as the rarity of a color occurring. There are even ranges within each grade to consider, which make it difficult to assess unless you’re an expert.That’s because even the slightest difference in color can have a big impact on its value. Aside from hue, or its color, the darkness and lightness of the stone (tone) along with its intensity (saturation) are important points to consider in assessing a diamond’s color.

Colored diamonds occur in a wide variety of colors, with black, yellow and brown being the more common hues, while pinks, blues, greens and reds are rarer, and therefore more expensive, with all values held constant. They get their color from trace elements that get into the diamond during its formation.

Natural-colored black diamonds used to be looked down on and were often used for industrial purposes because of its large cracks and chips and uneven color. However, people began to show interest in this dark stone during the 20th century, when designers used it in jewelry to add contrast to colorless diamonds in pave settings. Going beyond accent stones, some large black diamonds have even been used as center stones in rings to create a dramatic appearance. Black diamonds get their color from minute traces of graphite, pyrite and hematite in the stone. These form patterns within the stone, resulting in an uneven color when you look at it closely. Sometimes, it can even look brownish to “olive” green. Natural black diamonds are generally opaque, giving it a somewhat metallic look. And because these stones are often heavily included, or not very durable, it is important that you take very good care when handling or wearing it. 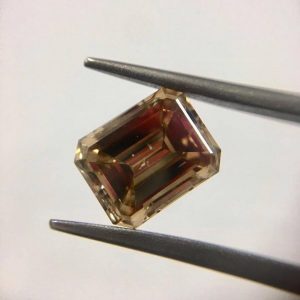 The most common fancy diamond color, brown diamonds were only good for industrial use until the 1980’s. Thanks to a sudden increase of quantity in the Argyle Mines and marketers giving them romantic names like cognac, champagne and chocolate, these brown diamonds have earned a place in the market and have helped make diamonds more accessible to consumers. Brown diamonds get their color from internal parallel brown lines that occur because of a distortion in the arrangement of molecules (crystal lattice). They occur in a wide range of tones, from light to very dark. Brown diamonds outside the D to Z scale can be graded Fancy Light Brown, Fancy Brown or Fancy Dark brown, depending on its tone, and these fetch better prices than their counterpart. 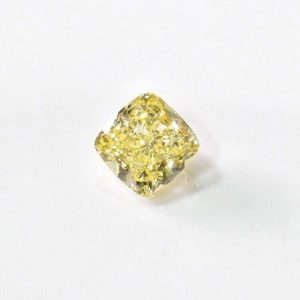 Yellow Diamonds are the second most abundant Colored diamonds. It’s often called canary yellow in the market for its bright yellow color, which can be attributed to the trace element Nitrogen. The intensity of the yellow color depends on the amount of nitrogen in the stone. The more saturated and noticeable the color is on a diamond, the higher its value. These yellow diamonds are categorized as colored diamonds and can range from faint all the way to fancy deep. Yellow Diamonds are often cut in fancy shapes, like the radiant cut. This helps maximize its yellow color and saves as much of the rough as possible. A yellow-gold mounting is often used for yellow diamonds to further emphasize its color

GIA researchers have theorized that a pink diamond gets its color from a distortion on its crystal pattern or lattice. These imperfections in the arrangement of atoms can cause the pink graining in crystals, making them appear pink. Pink diamonds have been found in areas like Brazil, India and even in far-off mines in Russia and Africa. The Argyll Mine in Australia is known for these pink diamonds, but even so, the yield there is also low, making pink diamonds a rare commodity. Pink diamonds can be mounted on rose-gold to emphasize its pink color. They can be used as both center and accent stones in jewelry, depending on the design and preference of the customer. 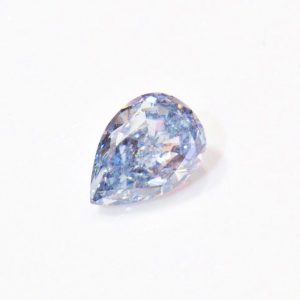 Blue diamonds are extremely rare, and often have a tinge of gray to it. Their color will never rival that of a sapphire, as it is lighter and more subdued. It gets its color from the element boron— the more boron present, the deeper the blue. Since blue diamonds are rare, the criteria to assess its color is more lenient. Unlike yellow and brown diamonds that start off at faint colors, blue diamonds start at light in the color grading scale for colored diamonds. India is a source for blue diamonds, along with mines in South Africa like the Cullinan Mine. The yield, however, is quite low, and oftentimes, the rough has uneven colors, which are challenging for cutters who need to get the best color and at the same time retain most of its weight.   One popular and rare blue diamond is the Hope Diamond, which earned the reputation of being cursed as it brought misfortune to its owners. 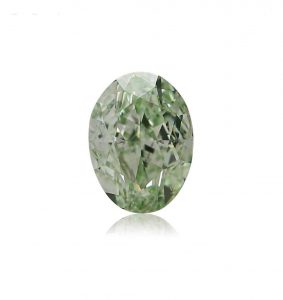 Green diamonds are often light in tone and saturation, and often have tinges of gray or brown on it. Its color will never rival a Tsavorite Garnet, nor an emerald, but its light color has a charm of its own. More often than not, the color of a green diamond is concentrated only on one area, so do not be surprised to see clear portions when you turn the stone around. Green diamonds get their color from radiation, which moves around carbon atoms from their normal position. This often happens when the diamond forms near radioactive rock. Green Diamonds can be found in Brazil, South Africa, India, Australia, Congo, Ghana and Siberia, but these occur rarely.

Orange Diamonds are another rare color for diamonds—second rarest color, in fact— and these usually spark interest in auctions and jewelry shows. According to William Goldberg, only less than 1% of all diamonds are orange. From bright citrus colors to warm honey-like amber hues, orange diamonds often come with a tinge of brown, yellow or pink. Pure orange colors, on the other hand, occur rarely. These diamonds get their color from Nitrogen, just like yellow diamonds, but these atoms need to be positioned in a certain way to get that orange color. They can be found in deposits in the Argyle mine in Australia, or even in South Africa. The famous orange diamond called “The Orange”, is a 14.82 carat fancy vivid diamond with a VS1 clarity, which sold for a whopping $35.5 million dollars in the Christie’s auction. The increase in interest for orange diamonds is all thanks to “the Pumpkin”, a pure orange diamond, which comes in at 5.54 carats and has a vivid orange color. 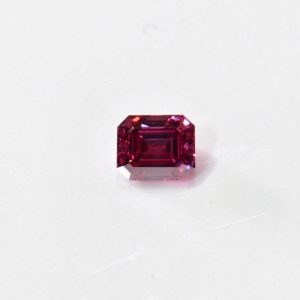 Red diamonds are the rarest color, especially if they are pure red. Up until now, scientists cannot exactly pinpoint the cause of its color, though theories have suggested that a defect in the atomic structure, similar to that of pink diamonds, may be the more probable cause. Red diamonds, however, can come with tinges of purple, orange or brown. While these make the diamond’s value lower than if it were pure red, these stones are still valued above all other colors. Natural and synthetic diamonds can be treated via irradiation, followed by heating, or even by applying a coating over the stone, but you need to be careful in handling these treated stones, since coating is just a temporary treatment.

How to Choose a Fancy Colored Diamond

The 4 C’s—Clarity, Color, Cut and Carat are often used to assess diamonds. However, for colored diamonds, color is the priority.

These stones are highly included and usually opaque, so they cannot be graded based on clarity. Since there is no variation in color and saturation, Black diamonds are generally categorized as Fancy Black. When it comes to choosing this delicate gemstone, opt for a stone with as little fractures as possible, so that it is more durable, making it last longer.

Fancy brown colors are generally more valuable than the colorless diamonds that come with tinges of color. Brown diamonds with medium to dark tones and a warm golden to reddish color are usually in-demand. Some can even show a hint of greenish, yellowish, orangy or pinkish tinges of color, and the value of a brown diamond rises depending on how rare the secondary color is. Simply put, a yellowish-brown diamond will fetch a lower price compared to a pinkish brown diamond.

The more vivid the color, the better. Since yellow diamonds are more common, you have a wider selection to choose from. Go for fancy yellow colors and above, better clarity grades and cuts for a more valuable stone.

Pure pink diamonds are rarer and more valuable compared to those with tinges of brown, orange and purples. Pink ones are often marketed as “rose”, while purplish pink stones are sometimes called “mauve”. Depending on your budget, the more intense the color, the more expensive it is.

Blue diamonds are rare, so size matters. The larger the stone, the more expensive it is. However, you also need to consider its color, since this is usually a priority. Usually, people would choose a small but highly saturated blue diamond over a large, light-colored diamond.

Orange diamonds often come with undertones of brown, pink or yellow, and while those fetch high prices in the market, a pure orange diamond is much more coveted. The intensity and color are important factors in choosing a diamond, which is why Fancy Dark and Fancy Deep colors are more expensive. Treated orange diamonds only have a surface-level color, and these are priced lower than its natural orange counterparts.

Pay attention to the color of your red diamond, especially in different lighting areas. Choose a diamond with a nice shade of red, usually pure, but with an occasional tinge is all right. Since red diamonds are rare, they generally come in less than a carat. In fact, the Moussaieff Red, which is the largest known red diamond, only comes at 5.11 carats!

Diamonds are a lifelong investment, and with the inconsistent supply of some colored diamonds, like pink, blue and green, now is a good time to start collecting these rare finds.